Up by 6:00 am... up, showered, Stevie in shower.... Mojave is a noisy town… it always has been… Its a railroad town and the trains started and stopped… it was a bang, bang, bang, as the slack ran in and out… now they are just the dull roar of the diesel… To make up for it they apparently now pick up garbage in the middle of the night… we were both awakened by the crash of a dumpster at 2:30

Stevie is out of the shower, so in a minute off to breakfast, then east 57 miles to the nearest Starbucks in Barstow.

At Barstow we drove Main Street… once Route 66… Checked out the old Harvey House, now a museum, then continued to motor east… We decided we were beyond Starbucks… A few miles beyond we visited Daggett… a sad little town named for one of Tina’s Great Uncles… We have his gold box and an Indian basket… John Muir died in Daggett… Old Route 66 passes through town but the bridge to the east is out, so that route is not an option….

Back to I 40… We picked up fuel in “Ft Cady”… a wide spot in the road, with a Texaco station, just beyond was a sign saying “Pavement Ends” The desert is full of abandoned dreams… you wonder about each ruin… why was it built, and why did the dream die…

We crossed the Arizona border at 10:30, 569 miles from home… We lost an hour due to the time change.

We took historic Route 66 in Kingman, and stopped for lunch at El Palacio, across from the railroad station… Back on I 40, off again onto Route 66 in Seligman, more gas and a photo of the “Road Kill Café” Back on I 40, we are seeing snow along the road… off again in Williams… lots of snow… Back on I 40 for the fast run east. Back to Historic 66 in Winslow… we stopped at the corner for photos of us “Standing on a corner in Winslow Arizona….”

We crossed into New Mexico at 5:23, 929 miles from home.
A quick stop in Gallup for fuel. It was sunset, and we drove the rest of the way in fast failing light and a “Blue” moon rose…

In to Albuquerque at 7:20, checked into our motel, walked around the “old pueblo” cute, but dead… its all jewelry and art galleries, so has no presence at night… We ended up eating at the hotel… Its getting close to midnight in New York, the TV is on… We will make midnight, then to sleep… we have 550 miles or so to go tomarrow.

We survived the first leg of the journey… We left home about 5:00, headed south down the San Joaquin Valley. Traffic was confusing, great near home… then rough going over Altamont pass… Hwy 5 was crowded… We saw a few wisps of tule fog near Bakersfield.
This leg wasn’t about traveling… It was about getting away…

We are carrying our technology with us... we have web enabled phones... so we have GPS and email access... Steph was keeping up with her facebook postings...

Steph is already asleep... I will be soon.

Tomorrow we will get up early, grab a bite to eat, and head east across the desert.
Posted by Randy Hees at 10:45 PM No comments:

First night out we are worried about fog… Valley fog… Tule fog… thick and nasty… but it looks like rain in the “Great” Valley, the San Joaquin… With luck it will knock down the fog.

We are headed east… to Maryland… only Steph (OK, Kellie, Stephanie) will make Maryland… I will end my trip at Dulles airport in Northern Virginia… to fly home… next Tuesday… January 5th

Tomorrow I have to oversee a couple of camps… not my camps, but others need vacation too… and they will watch the house (Patterson House, my place of work) while I am away…

There is another trip looming… a long trip far, far, away… South America for three weeks… Three days after my return from the east… Planning for that trip has meant that I am not thinking about this one… As a result, I am packing quickly, rapidly, with less planning than I would like… I like under planned trips… I don’t like under planning the packing…

At least I plan to check my bag from Dulles… due to the short trip, weight isn’t an issue… Plus this flight is on Virgin America… The best damn Airline flying domestically in the US… I mean that… Really… 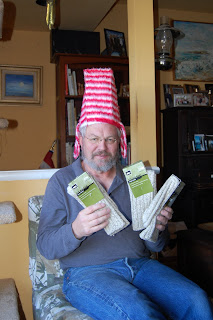 It was so rushed we never put up a tree… With the Thanksgiving trip, a weekend in LA for my nephew’s wedding and work we really never got a handle on the holiday.

We did our traditional Christmas Eve dinner, roast beast, Yorkshire pudding and had friends over… Steph and I finally put up the lights on Christmas Eve.

On Christmas day we went to Tina’s brother’s house in Sacramento for a big family dinner.

Strangely our low key Christmas seems right... There were few gifts, mostly things for the big trip. Between the wedding and the dinners there was lots of family. There was more than enough food. I guess I got a sufficient dose of Christmas decorations and lights between Patterson House and a neighborhood we stumbled into in Redondo Beach after the wedding which was over the top lights everywhere.

Brian should be home on leave tonight. We will have a nice dinner tomorrow, then Stephanie and I leave on Wednesday evening on our drive to Maryland. There should be several posts from the road.
Posted by Randy Hees at 8:11 AM No comments:

We arrived home From the East on early Monday, November 30th … I was at work by 10:00, Tina soon after… and in to the hustle, bustle and craziness that is our daily life. I have been heard calling it “Merry “F”ing Christmas”…. I mean it.

There were a couple parties included… Tina’s Google party, complete with ice skating…

Now its Tuesday December 15th and its cold… Its 8:00 p.m. and Tina is still at work… I have dinner on… it will keep, maybe even get better. It’s a pork stew… (pork is really low fat and therefore low calorie) over fingerling potatoes.

We are preparing for a quick trip south… Our nephew is getting married in Los Angeles Saturday… we drive south Thursday night… there is a rehearsal dinner on Friday, the wedding Saturday… I have duties… I have to heard the family during photos… I may bring a cattle prod… probably not… We plan to drive home with the daughter on Sunday… The son comes home after Christmas… duty calls him elsewhere on the 25th

Saturday… up eventually, shower, cleanup a bit and pack…

We start at a Starbucks for coffee in Alexandria, the off to D.C., driving this time… we park near the Vietnam War Memorial… Its Tina’s first time… She calls a friend who served there… offers to make a rubbing of a name… From there we walk to the Lincoln Memorial… take pictures with the flat guy, then walk around the Korean War Memorial, and up to the World War II memorial… they are all very different, all reflections of the time and the people involved, and all made more powerful by the differences, and the proximity of the three… The Vietnam memorial is a stark gash in the landscape, with the many, many names engraved on the black granite wall. The Korean memorial is a group of 40 some statures, collectively a platoon of solders, bundled against the cold… The World War II memorial is classic, with columns, and Greek temples…

We continued down the National Mall to the Hirshhorn Gallery… Back across to the National Museum of History for a second visit, then back to the car, and off to California Maryland where Stephanie is living with Kellie and the kids… Nice evening, nice dinner… then off Sunday morning to explore Saint Mary’s City, where Maryland was founded in 1634… Saint Mary’s was abandoned by 1695 and forgotten under the plowed fields… Now it is a historic museum, under the auspices of the State of Maryland, the site of much archeology and some reconstructed buildings… the site is well done, and doesn’t suffer from the crowds that overwhelm Plymouth and Jamestown.. It was the last day of the year that they would be open… it was wonderful, well worth the visit.

Afterward, we meet Kellie and the kids for lunch on Solomon’s Island… along the shore of Chesapeake Bay… then north towards Baltimore… We checked in at the our hotel at the airport, then drove north to Baltimore Harbor to walk around and get a snack… back to the hotel where we said good bye to Stephanie… She had a 2+ hour drive back to California Maryland.

It’s a full flight… they are looking for volunteers to be bumped… They have announced that there isn’t enough room for carry ons…. “FAA will be inspecting…” “Please gate check if you bag doesn’t fit…” I sense a bit of panic…
Now in line to board, one man, challenged for bag size at the gate, emptying his bag, trying to stuff it into the frame “your bag must fit in this”… People continue past on to the jet way, on to the plane, to their seats looking for overhead luggage space… then past their seats until they find the precious space, but then have to fight their way against the flow back to their seats…. The crew is announcing that if you can’t find space for your bag return to the gate to gate check… considering the crowded aisles, an near impossibility… We found space near our seats… Now packed on like cattle on the way to slaughter we try to relax… Eventually we both napped…

We landed at SFO about 9:00… we caught a taxi home… I was at work just after 10:00… Jumping head first into Christmas… but more on that later…
Posted by Randy Hees at 2:49 PM No comments: