Summer, Trip Planning and Miscellaneous Thoughts and an Occasional Tomato

Here in the north end of the land of endless summer and little rain summer brings fog and cold weather alternating with bright sun and heat… sometimes several times on one day.

I leave home in the fog, arrive at work in the sun, return home in time to see the sun disappear as the fog pours over the coastal hills…

Summer is the time to garden… I have done well this year… I harvested the first four tomatoes yesterday… they were tiny, but they were red and ripe and made a very nice tomato salad… a really small tomato salad. The first were Stupice, a Czechoslovakian heirloom… the next will either be San Francisco Fog or Yellow Pear cherry tomatoes.

For many its time to travel and take vacation… that has become more complicated as we now offer summer camps at the Patterson House, making absence difficult. Difficult but not impossible, I just have to plan more carefully.

The net week brings the first two journeys… the first to Salem Oregon. It will be a quick trip, fly to Portland late Friday, spend Friday and Saturday nights there… attend a family reunion (Tina’s side) drive back to Portland and fly home… The daughter is attending, but she is driving up with her aunt and uncle, and cousin Jay, just home from Afghanistan. The son is driving down from Everett. The local brew pub is having its beer festival Saturday… I plan on sneaking away with Jay and the son to taste a few. Sunday we return to home and work.

After two more days at work I leave Tuesday night for the second trip… this time a flight to Seattle… then drive back with the son… We will be towing a trailer with his room mate’s car and his motorcycle as far as Corvallis… then I will drive the jeep and he will ride the motorcycle the home… A week or so later he will drive back north, to rejoin his ship and deploy to the gulf. His motorcycle will remain here for the duration.

August will bring a visit to my parents in Florida, then in September, after the camps are over I will try to escape on a solo road trip… there are desert vistas and long abandoned cliff dwellings calling me. 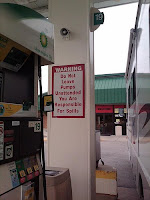 According to several reports, this link is the most forwarded or twittered photo today… It’s a sign at an Ohio BP station… I wonder if they accept their own statement of “rules of engagement”…

Beyond being wildly funny and appropriate, it suggests the frustration and helplessness of the collective “us” while viewing the slow motion train wreck which is the gulf oil spill…

Despite the “cap” which is reportedly gathering more than 10,000 barrels a day of the estimated 5,000 barrels of oil escaping… the situation continues… It’s a slow motion disaster. At best the local fishermen will loose a couple of years of fishing… at worse they have just lost their livelihood, for ever.

The locals are trying to keep the oil out of bays and estuaries. We hope they are successful.

Enjoy the photo.
Posted by Randy Hees at 6:23 PM No comments: